You will find on this page a full guide about the US Army patches, including WW2 patches. We will give you historical details about these patches and a list of US Army patches with pictures.

History of the US Army patches

It was during the Civil War that the first distinctive fabric patches appeared. They were simple geometric shapes cut out of colored cloth and sewn on headgear or coats.

But it was during the First World War, on the initiative of the Commander of the 81st Infantry Division (Major General C-J Bailey) that the first arm insignia of the US Army was created. This one took again the drawing of a wild cat which was in fact the symbol of the 'Wild Cat' county where had been raised the 81st ID.
It is at the beginning of August 1918, just before the departure of the division for France that were delivered the first specimens of the badge. The wearing of this insignia was not lawful, but it had such a success with the other units of the AEF (American Expeditionary Force) that the general staff decided on October 19, 1918 to authorize all the units stationed in France to wear a distinctive insignia.

Manufacturing of US Army insignia

1) 1918 -> 192~
Until the twenties the manufacture of badges was carried out by sewing or gluing pieces of fabric or felt together. During the Great War, soldiers sometimes made their own insignia with pieces of colored fabric recovered from French and German uniforms.

2) 192~ -> 193~
During this period the first embroidered badges (Embroider) appear. They are made on felt or woollen cloth. We can also see badges that mix the two processes 'Cut and Paste' and 'Embroider'. In fact we glue or cost on a piece of fabric the symbol then we add embroidery afterwards.

3) 193~ -> 1968
Subsequently the mechanical means modernizing the manufacture was done by embroidery machines. In fact the military patch was embroidered on large strips of fabric (usually Khaki or Olive Drab color) and then cut by hand. We speak of manufacturing type 'Flat Edge', we also use the term 'Cut Edge'. The fabric used was cotton and the thread could be cotton or nylon.

It should be noted that during World War II, there were several types of manufacturers:

- Workshops of the US ARMY (recognizable by the olive green weft and edge)
- American Civilian Manufacturers
- Local manufacturers of the theaters of operations (Italy, France, Germany, Australia, ...)

We can therefore find for the same unit, a multitude of different insignia, whether by the design, the materials used (fabric texture, color of threads, ...), or size.

The locally made insignia in canetille, although worn, was not authorized by the high command.

During the 50s, the fabric used was the same color as the background color of the badge which allowed to use less embroidery weft or a certain economy of thread.

From 1957 to be in accordance with the new color of the uniforms, the border of the badges is made with thread of color Army Green.

5) 1968 -> to the present day
The manufacture is of Merrowed type, i.e. with hemmed edge. Indeed the main defect of the Flat edge badges was to fray. They are easily distinguishable thanks to the Trailing Edge or Pig Tail that protrudes from the badge.

Examples of US Army insignia manufacturing : 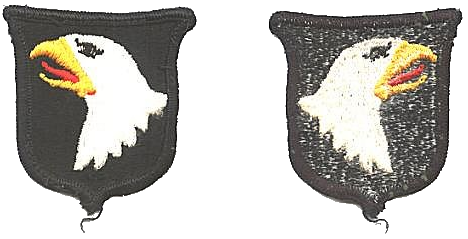 Some examples of WW2 US insignia

Here are some example of Army group patches of the WW2 : 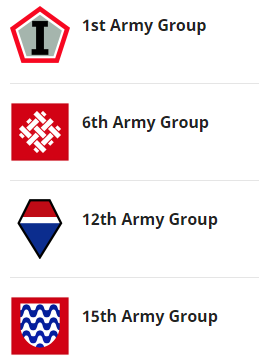 . Based in England, the 1st Army Group prepared the landing in Normandy

. Based in Corsica, the 6th Army Group prepared the landing in Provence during WW2.

. The 12th Army Group prepared the liberation of France. (based in France)

. Based in North Africa, the 15th Army Group prepared the landing in Sicily and Italy.

Here are the patches of the various armies of the US Army during WW2 : 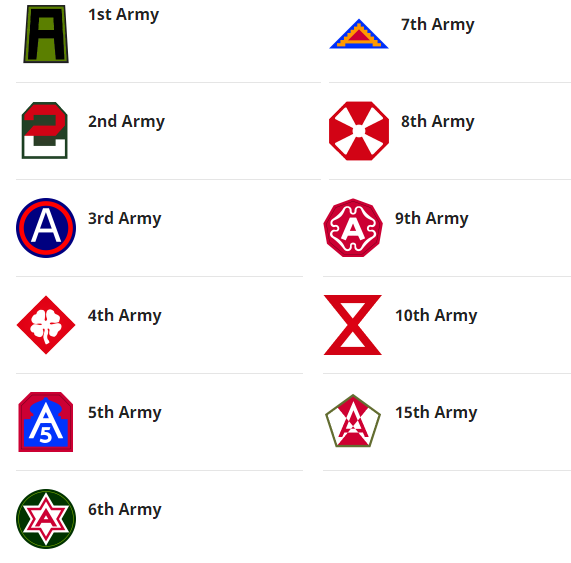 Here are an almost complete list of US Army Corps insignia of the Second World War : 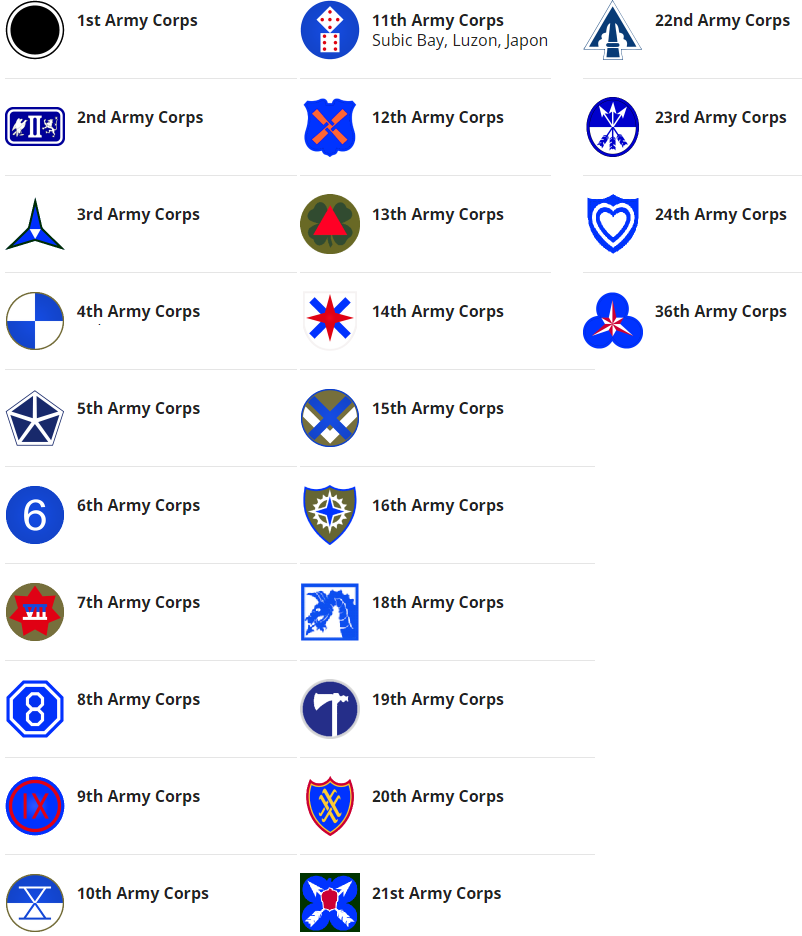 And here you will find an almost complete list of US Infantry Division insignia of WW2 :

We hope you will find this list useful, we will complete it in the future weeks.