You will find on this page a complete article about the HBT Fatigue Uniforms, their origins, pictures of each model, their manufacturers, their QMC designations and so on.

The origins of the HBT uniform

The Herringbone Twill work suit, better known as "HBT fatigue uniform", is named after the type of weaving of its fabric (fish bone). It first appeared in the field in 1941, but has been in Quartemaster Corps (Q.M.C.) projects for much longer.

In fact, it was in 1938 that the QMC decided to replace the working outfits made of strong denim (Blue Denim), which was coarse and unpleasant to wear, with outfits made of herringbone twill fabric, which was more suitable. That year, the HBT coverall made its appearance.

In 1940 the Q.M.C. released a new version of the work suit. Still in Denim fabric, but with a much better fit and above all pleasant to wear.

The evolutions of the HBT Fatigue Uniforms

In 1941, the new HBT canvas work clothes arrived. From then on, a succession of jackets and pants followed until the end of the war. That's why, U.S. Army soldiers wore different types of HBT uniforms.

A study of the QMC catalogs of this period and the observation of field clothing and their labels is sometimes confusing. Indeed, references, contracts and stock numbers evolve throughout this period and it is therefore very easy to get lost in them.

We can nevertheless group HBT outfits in the following way:

The 3 models of HBT jackets

It is not rare to see on the period photos that the HBT outfits were often mixed. The soldiers had at their disposal what the stewardship allowed.

The HBT outfits M1942 and M1943 were declined in 3 versions:
- The standard version: the basic model,
- The special version: addition of an anti-gas flap and buttons on the back of the collar to allow the addition of the anti-gas hood,
- The protective version: same as the 'Special' with anti-gas impregnation.

Features :
Two chest pockets with cut corners, gussets and flaps also with cut corners. Waist adjustment with two straps placed on the sides. Buttons on sleeves. 2 Buttons close together at the bottom of the jacket at the waist. Color light OD. 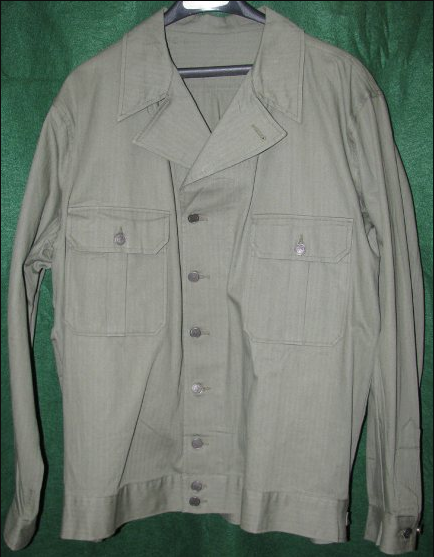 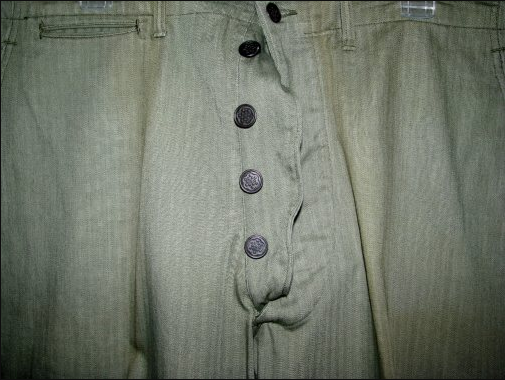 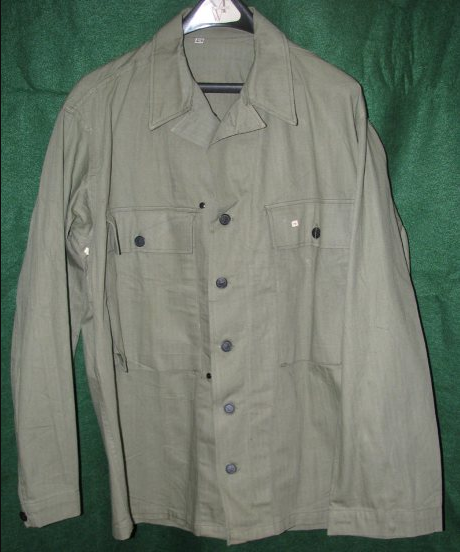 Features:
The side pockets are gusseted cargo style and closed with buttoned flaps. Light color OD. 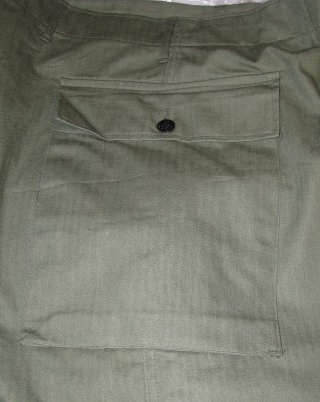 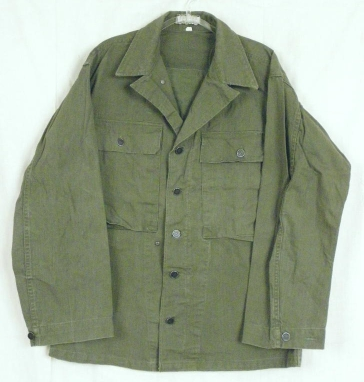 Characteristics :
It is identical to the P.Q.D. specification, No. 45C. The only change is the use of an O.D. #7 shade, which is much darker than previous versions. 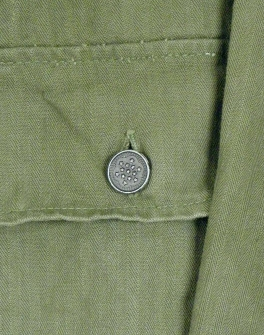 The US Army M43 Trousers 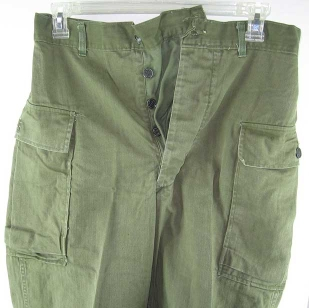 It should be noted that there are many variations on the patterns. These differences are related to the different manufacturers and to the modifications made throughout the conflict.

In particular, it is important to note the following variations : 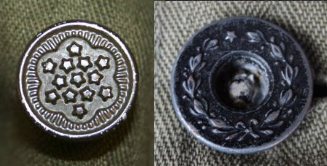 The pockets :
Variation of the sizes of the pockets, gussets (lateral or median) on the M42 and M43. Shades :
Even if the shades are referenced, there are obvious differences from one HBToutfit to another, ranging from very light to very dark OD green.

Some other facts about HBT Fatigue Uniforms :

. HBT jackets and pants fit larger than the size indicated on the labels. This is perfectly normal since they were intended to be worn over other clothing.

. Originally designed for chores, it was one of the major pieces of the GI's battle dress. Practical and comfortable to wear in warm climate as a replacement for the 'mustard' outfit, but also very popular in winter period as a complement to the woollen cloth outfit. It remains a bad memory for the soldiers who wore it in its version 'Impregnated against gas' because smelly and sticky even after several washes.

We hope you've found this article useful. Feel free to share the url link on some militaria forums.

Have a look to our page dedicated to WW2 militaria, you may find some available HBT uniforms for your collection. We select there the most interesting WW2 militaria items available online.