The US M1 Helmet guide

On this page, you will learn all you need to know about the famous US M1 helmet.

The US M1 : the mythical GI helmet

The M1 helmet is inseparable from the GI's image. It was introduced in 1941 to replace the Mle 1917A1 helmet. The helmet Mle 1917A1, was in fact only a mle 1917 modified by replacing the leather chinstrap by a cotton one and modification of the leather cap. Although very effective in their time, the flat bearded type helmets were above all effective for trench fighting. Well adapted to protect fighters from falling projectiles, these helmets provided rather poor protection for the sides and back of the head. This is why the American army decided to adopt a helmet with a shape more adapted to better protect the head while allowing good visibility. The prototype corresponding to its specificities is born under the denomination of TS3 and accepted in February 1941 by the US Army. The US M1 helmet is standardized on April 30, 1941 and is approved on June 9, 1941. The M-1 helmet, differ from the other models by this construction in two independent parts that we call the heavy pressed steel helmet with stainless steel rim (Body) and the light fiber helmet (Liner). Its shape remained unchanged throughout the conflict, but some small modifications were made to the chinstrap attachment rings of the heavy helmet as well as to the chinstrap attachment.

Production of the US M1 Helmets :

Production was stopped in August 1945, almost immediately after the end of the war. It will resume only in March 1951 for the Korean War.

The marks of manufacture :
Inside the hulls is stamped a number which is often considered as a serial number. In reality, this is not so. This number is in fact a heat treatment identifier allowing, if necessary, to find the defective series. The number is located inside the helmet at the front.

The McCord company having been seconded from January 1943 by the Schlueter Manufacturing company of Saint Louis in Missouri. It was necessary to differentiate the productions. That is why the heat treatment identifiers of the Schlueter company are preceded by an "S".

Differences:
Except for the markings, there is a slight difference between the hulls manufactured by McCord and those made by Schlueter. The profile of Schlueter hulls is much straighter than McCord hulls. 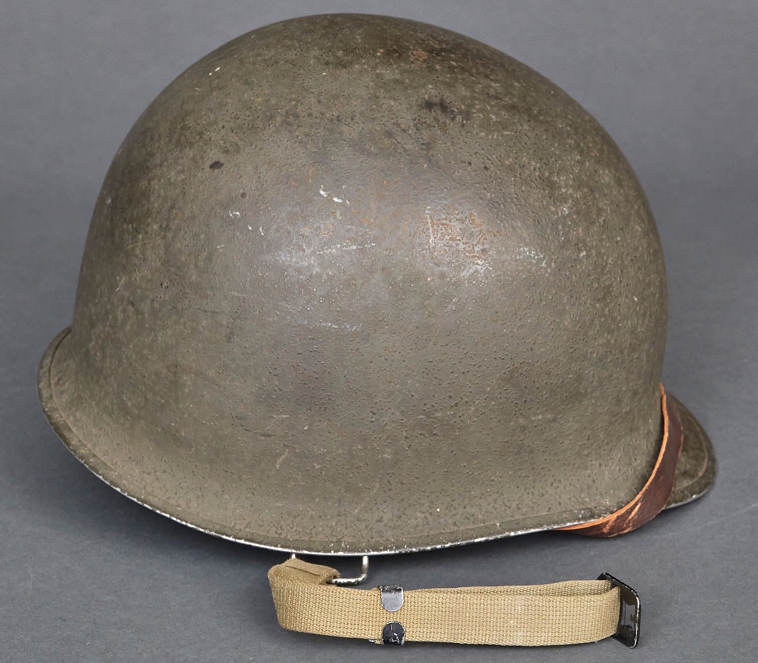 Production of US M1 helmet liners :

33 Million copies for liners, with the main manufacturers as follow :

The various types of US M1 helmets :

Production began on June 26, 1941.
The Ordnance Department entrusted the task of producing a first batch of 323,510 heavy helmets to the McCord Radiator and Manufacturing Company located in Detroit, Michigan.

Details :
The first Heavy Helmets had the peculiarities of having fixed rectangular chinstrap attachments and an anti-magnetic ring. The main problem of this version, is this antimagnetic ring on which the paint does not hold and which then shines when exposed to the sun. Moreover the hulls have a strong tendency to crack this due to the use of a poor quality steel and especially unsuitable for the method of stamping (in one go) of the hull.

Specifically for airborne troops. The M-2 helmet is actually an M-1 helmet with modified chinstrap attachments. Its production started in January 1942 and ended in December 1944 when it was officially replaced by the M-1C model.

Note: The M-2 type shells were produced by the McCord company for a quantity of only 148 000 pieces.

Special features :
The difference between the M-1 helmet and the M-2 is mainly in the chinstrap and straps.
The straps on the M-2 allow for greater chinstrap mobility.
The chinstrap also has an additional tongue on each side and is equipped with a pressure device to secure the heavy helmet to the under helmet.
The Half moon type was abandoned because the chinstrap attachments were very fragile. It is not uncommon to find models of the field with repairs (D Ring rewelded, or even replaced).

There is another variant of helmets for paratroopers. This is the helmet in which the standard chinstrap has been replaced by a parachutist type chinstrap.

From 1943, the QMC decided to modify the fastening system. The fixed fasteners were replaced by rectangular fasteners, but in two parts (a kind of hinge). This type of attachment is much less fragile and allows a better mobility of the chinstrap.

Benefiting from the evolution of the M-1 helmet, the helmets for paratroopers are equipped with a system of mobile attachments. The chinstrap remains unchanged.

Particularities : It seems that although present in the catalogue of the QMC from January 1945, it seems that it was used in the field from the end of 1944.

In May 1994, it was decided to correct the problem with the stainless steel snap ring. Different solutions were then tried, such as sandblasting the utility tape, which remained unsatisfactory. Particularities In October 1944 the stainless steel snap ring is replaced by steel of the same nature as the hull. At this same period, the weld of the rush is moved backwards.

The different types of chinstrap for US M1 helmets :

There are two main types of chinstrap. The first model in Khaki cotton and the second late model in OD cotton.

* It should be noted that the second type of fastener (automatic degreasing) does not seem to have been distributed before the end of the war.$

The various types of US M1 helmet liners :

The lightweight helmet is originally made of compressed fiber (cardboard pulp) and covered with a thick canvas glued.
The latter being fragile, it was replaced in 1943 by a model made of compressed fibre and impregnated with a synthetic resin.
Its fully adjustable interior is made up of an assembly of cotton and leather straps. It has a leather chinstrap.

There are two versions of this type of liner :

- The early version manufactured by Hawley (43,000 copies) and by Inland (75,000 copies) plastic type. Recognizable by its 13 rivets, because the A frames are fixed to the suspension system.

- The end of war (mid or end of 1944) manufactured by Westinghouse, having 17 rivets, because the A frames are riveted independently of the suspension system.

How to recognize a WW2 M1 helmet?

At the weld on the rim of the heavy helmet. This is located on the front of the helmet for WWII models and on the back for later models.