The Katana : a mythical Japanese sword

The katana : a symbol of the samurai

Symbol of the samurai caste, the katana is worn slipped in the belt, cutting edge directed upwards. It is a size (do not use the cutting edge) and thrusting weapon (do not use the point), it must be as sharp as possible. Its handle (tsuka), varies between the width of two or three hands. The tsuka ends with a guard (tsuba) which protects the hand and the weight of a standard katana varies from 800 grams to 1500 grams.

A rare japanese katana sword from the WW2 is a very sought-after piece by militaria collectors. They can easily reach $2000 online.

Manufacturing techniques of a katana

Its manufacture uses multiple techniques mastered by highly qualified craftsmen who succeed in its manufacture. Making a katana is very special The first phase consists in melting the raw ore (iron ore) in a furnace giving the tamahagane which will then be placed in another hodo oven (with a precise steel / oxygen dosage). Then comes hammering in order to fragment the steel into small pieces; steel which will also be heated to 1200 ° / 1300 ° to form a condensed rectangular block. This block will be cut, folded and then reshaped; operation which is repeated several times in order to obtain a laminated steel, which will determine the external appearance at the grain of the blade, during the final polishing. These hammers allow the purification of the steel and thus modified the raw material. This block will be bent into a U (kawagane), softer steel will be inserted in the center of the U (shingane). This condensate is in turn hot hammered at more than 1000 °, facilitating the establishment of steel during the forging of the saber. It is only at the end of this task that one obtains the raw saber. The next phase is the creation of the quenching line (yakiba): an agglomerate of clay is placed over the entire blade, avoiding the cutting edge, then the blade is heated to 800°C over its entire length then immersed in a tank of water. This sudden change in temperature gives the blade its own aspect and allows the sword to keep flexibility and sharpness. If no defect is found, the next step can begin: it is the polisher who will take over to bring out all the nuances of steel and the quench line. The final phase is the signature.

Length of a katana: between 60cm and 1 meter.

The composition of a katana blade 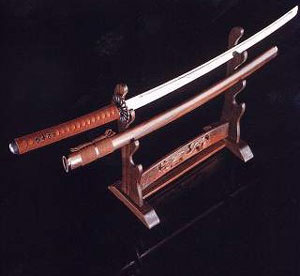 How to display a katana :

When the katana is on its display, it is placed: