The Japanese sword names and specificities

You are a fan of Japanese swords and want to discover their Japanese names, their specificities, their history: this blog article is made for you !

The names of the Japanese swords

Depending on their period of manufacture and therefore the techniques of production, the Japanese sword takes on different names: 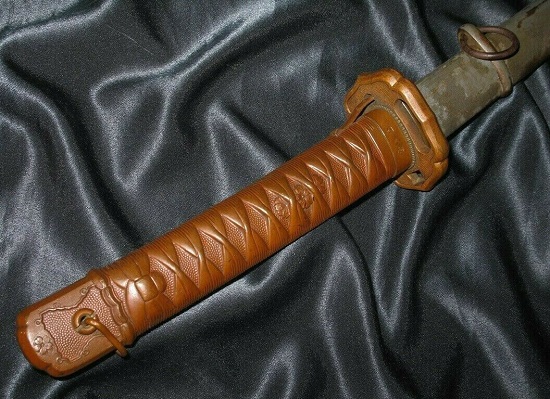 The names of a Japanese sword parts

Here is, for information, the name given to each part of a Japanese sword. An article would be needed just to explain the specificities of each sword. Indeed, for each Japanese sword the parts were built differently.

Information about a famous Japanese sword: the katana

The katana perfectly represents the Japanese sword as a whole, its 60 cm blade or 2 shakus (depending on the size of the Japanese blades), its handle from 20 to 40 cm (40 cm for katana forged in peacetime for a role more decorative) and its weight of 1 kg allowed the samurai to quickly draw their sabers modified with tachi, but also to carry out fast combats (unlike the much heavier European swords). The katana is equipped with a wide lame blade over its entire length and with a single cutting edge, this curvature allowed the samurai to strike fatal blows without hampering them in their movements. Thanks to the technique of Japanese blacksmiths, evolving from centuries to centuries, the curvature of the sword improved to increase more and more the power of portable blows. The katana was worn "cutting down". In addition, thanks to a special forging method, blacksmiths have been able to make the katana blade stronger than steel (and even today). Thus, the blades of the katana have become increasingly sharp and almost unbreakable. To forge a katana, blacksmiths wrapped a layer of medium hard iron under a second extremely hard layer. To forge them together, they heated them, bent them, hammered them and soaked them several times.

The tachi saber predates katana. It is the first Japanese sword forged, however, its evolution is blocked by the importance that will take the katana. Indeed, the tachi is a sword longer than the katana and therefore more difficult to handle on a battlefield. The blade of the tachi is thinner than the katana which did not allow the riders to inflict fatal blows, but allowed them to handle it with more comfort while holding the reins of the horse with their left hand. A two-handed fighting technique was then practiced by the foot samurai to inflict more damage in combat. The tachi was worn "cutting up", unlike the katana, because the length of the blade would have prevented the samurai from drawing it in one gesture without damaging it. After the endorsement of the katana, the tachi will survive in a ceremonial and ceremonial role. It becomes more of a work of art than a real sword.

The nodachi or "field saber" was introduced in the Nanbokucho period (1336-1392). It was only used by samurai on foot, and for good reason, it was higher than the samurai. This saber could not be drawn from its sheath by one person. A servant had to take the weapon from his scabbard and then give it to his master. In single combat, this weapon was able to inflict fatal blows on almost every stroke. It was also used to stop cavalry charges, for that, it was enough to perform a sweep at the level of the legs of horses.

Associated with katana, wakisashi forms the daisho. This saber suit has always been a distinction reserved for samurai only. Its anatomy and constitution are identical to katana, only the size varies. A wakisashi blade measures 40cm against 60cm for the katana. Wakisashi was used by the samurai when fighting in confined spaces (indoor fighting for example). Conventionally, this sword is worn on the left side, like the katana but "cutting down" which allowed the samurai to draw quickly. A fighting technique that combines wakisashi and katana was developed by Musashi Miyamoto (a living legend in Japan) under the name of ichi ryu nito. Unlike the katana, the samurai could permanently keep his wakisashi on him, thus allowing him to escape certain traps. Originally, wakisashi was associated with tachi and was used to decapitate its opponent once defeated and on the ground. The heads made it possible to count the “score” of the samurai and his master to reward him accordingly. Finally, the last use of wakisashi is to decapitate the samurai after it has opened its stomach with the kusungobu dagger during ceremonial suicide: the "seppuku" better known by the name of "hara-kiri". Some wakisashi were specially forged for this use. They were shorter than conventional wakisashi and did not allow the samurai, condemned against their will to be seppuku, to defend themselves.

The ninjato is, as its name suggests, the saber used by the ninjas, these warriors grouped in the form of clans offered their services for various missions (spying, intimidation, assassination ...). After using the katana for a while the ninjas adopted this sword. This one, straight, 50cm long, was carried on the back with the sleeve up so that you could draw and shoot the blade at the enemy with the same gesture. Once planted in the ground, it also served as a small step thanks to its square guard.

The Gunto: the Japanese sword of the WW2

The gunto is the name given to sabers forged from the 20th century. This mass-produced Wakisashi-style saber did not match the performance of forged sabers so far, but was nevertheless of good quality. It is only used by the military because a law of 1876 prohibited the wearing of the saber to any person outside the army. This is how the samurai will retrain in the army. During the wars that will mark the twentieth century, the military will wear a gunto on their belt with which they are supposed to engage the enemy even if the latter is greater in number. Kamikaze pilots also embarked with this weapon before taking off for their last mission. The Tanto According to the classification in use in medieval Japan, the word tanto generically designates weapons whose blade reaches a maximum length of 1 shaku (1shaku = 30cm). However, today the tanto is characterized more by a specific shape of the blade than by its size. In the photo above, the knife on the left is a tanto according to the modern classification. It is characterized by the guard located above the handle. The knife on the right is him without guard, he is called an aikushi. This dagger was mainly functional, the samurai often changed it unlike the wakisashi and katana which wore out, less quickly. The tanto was worn on the belt on the right side which allowed the samurai to draw it very quickly. Sometimes, a samurai even wore several, scattered in his clothes (especially in the kimono jacket). Tanto was used by women when they wanted to kill themselves. They committed suicide by cutting their jugular vein. The Gunto is the most sought-after sword by militaria collectors, you can find many Japanese swords available on our Japanese militaria page.

The kozuka or ko tsuba (small handle) is a small knife with a flat handle. It is the real replica of a miniature katana. It is obviously not used in combat due to its small size but is part of the essential equipment of the samurai. He uses it all the time to, for example, cut a toothpick or chopsticks. The most solemn use being to cut the pen used by the samurai to write his last poem before being "hara-kiri" in wakisashi.

The iaito, is a non-sharp metal replica of a katana. It is the training weapon for practitioners of aiaido, a saber combat technique aimed at removing the saber from its scabbard (saya) at lightning speed and hitting its opponent before it is had. time to completely draw his weapon.

The boken, made of rigid wood, is a weapon in itself. The famous samurai Misashi Miyamoto won his famous duel against Sasaki Kojiro using a boken. During medieval Japan and the time of the great sword houses, the disciples practiced mainly with this type of saber. The shinaï, formed of strips of bamboo held by a leather sheath, makes it possible to carry real strikes without danger after use of body protections. It measures 1.20m and is used by kendo practitioners.

The shinken is an authentic and sharp katana; it is used mainly for cuts, as in batto do and tameshigiri, against targets made of rolled tatami or bamboo. It is used by high ranking officers (5th dan or more) in kenjutsu, to take exams, or certain kata.